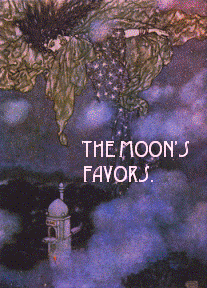 The moon, which is caprice itself, looked in the window while you were sleeping in your crib, and said to herself: "That child pleases me."

And then she mellowly descended her staircase of clouds and passed noiselessly through the windows. Then she spread herself over you with the supple tenderness of a mother, and she left her colors on your face. Your eyes remained green, and your cheeks extraordinarily pale. It was while contemplating that visitor that your eyes became so bizarrely large; and she so tenderly crushed your throat that you have retained forever the desire to cry.

Meanwhile, in the expansiveness of her joy, the Moon filled all of the room like a phosphoric atmosphere, like a luminous poison; and all of that living light thought and said: "You will be eternally subject to the influence of my kiss. You will be beautiful in my manner. You will love what I love and who loves me: water, the clouds, silence, and the night; the immense, green sea; formless and multiform water; the place where you will not be; the lover you will not know; monstrous flowers; perfumes that make you delirious; cats who swoon on pianos, and who moan like women, with a hoarse, gentle voice!

"And you will be loved by my lovers, courted by my courtiers. You will be the queen of the green-eyed men whose throats I have also pressed with my nocturnal caresses; of those who love the sea, the immense sea, tumultuous and green, formless and multiform water, the place where they are not, the woman they do not know, sinister flowers that resemble the incense burners of an unknown religion, perfumes that trouble the will, and savage and voluptuous animals that are the emblems of their folly."

And it is for that reason, cursed, spoiled, beloved child, that I am now laying at your feet, seeking in all of your person the reflection of the formidable Divinity, of the prophetic god-mother, of the wet-nurse who empoisons all lunatics.